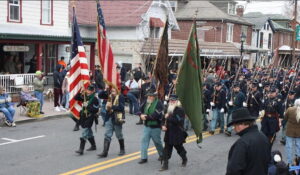 The National Regiment marching in the Gettysburg Remembrance Day parade.

The National Regiment (the “NR”) was formed in 1985 as a generic Federal infantry battalion of civil war re-enactors under common leadership to portray a historically accurate regiment of infantry, in all of its detail, in camp and in the field. We strive for period authenticity in drill, command structure, camp life, equipment/uniforms, etc. The National Regiment participates in various re-enactments, living histories, etc. throughout the year. Many of its members have also been a part of a variety of movie and TV projects.  We also work with the National Park Service (NPS) at various sites.

What are Civil War re-enactors? Click here for an article with a brief overview of our hobby.

The NR has member units stretching from New England to the mid-Atlantic and into Ohio and West Virginia. We have put together a list of member units with their approximate geographical locations. If you are interested in learning more to possibly join our ranks, please visit our member unit page to find a unit near you or you can send a message to the National Regiment via our ‘contact us’ page.

A few videos of the men of The National Regiment in the field:

[For more photos and videos, visit our photos/videos page]

At one of The National Regiment’s living history events in Gettysburg, we participated in “The Colonel’s Challenge”. The purpose was to try to load and get 3 aimed shots off in 1-minute, like the men fighting in the Civil War were trained to do. As a group of civil war re-enactors, we obviously don’t participate in this hobby 365 days per year, so it takes some training and practice to get efficient in loading our weapons and firing them.  Video courtesy of Legomaker961. For a list of prior winners of “The Colonel’s Challenge”, visit the “About The NR” page and scroll to the bottom.

Dress Parade – Gettysburg Remembrance Day Parade (2021):
One of the things that differentiates the National Regiment from other units is that we do dress parade at our larger events. Dress parade was a formal ceremony in which the regiment was formed by company and reviewed by the Colonel, reports of rolls calls were provided, and any important orders were read aloud to the men. The NR does dress parade annually at the Gettysburg Remembrance Parade. During the Remembrance Day Dress Parade, we honor members who have died since the prior parade and we also award our Solider of the Year and La Médaille “Esprit de Corps” awards.

© 2022 The National Regiment – all rights reserved.